I know, I know, it’s been a while but I’ve been super busy being the director of the shiny new steampunk web series known as A Murder of Crows which I’m sure you’ve all heard of by now. It’s feisty, it’s fun, but most of all it’s really close to my heart. It’s been a year now since this idea has been circling around my brain, trying to get out and eventually, it did. Thank god. I wrote the script, submitted it for reviews, changed it (drastically at times) and voilà! I’m sitting here, trying to stay awake on like 5 hours’ sleep thinking well, that’s it. All we have to do now is edit the damn thing and then there it is, ready for the world to watch, enjoy and love. Or watch, loathe and tear to shreds, but we’ll see. Audiences are very tricky to determine, but I figured if I like it, our audience will also like it.

It’s been a tough three weeks. We’ve done a lot of filming which includes an awful lot of late nights and early mornings. We’ve had stresses and fallings out, people being sad or angry or frustrated, but we’re all friends again now and we’re all excited to see what the edit will bring. It’s been lovely to see something that I’ve written and formed become something physical and real that other people believe in and I am so excited to present it to the steampunk community to see what everyone thinks of it. The dream then is for it to become a beloved web-series and for it to turn into something magnificent. I have plenty more ideas for other episodes and I desperately want to carry it on. It all depends of course on the reception and any funding, but that’s just how the industry works.

I’ll leave you with a couple of pictures to goggle over and I’ll try to keep you updated with what’s going on! I promise x 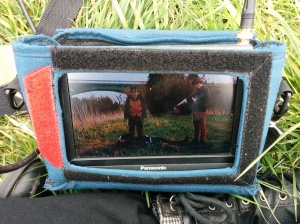 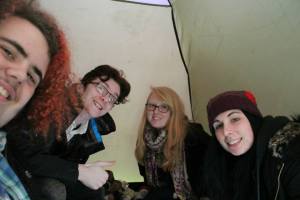 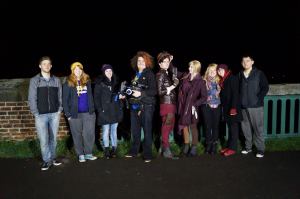 So here it is, ladies and gentlemen, my web series pilot’s Kickstarter Campaign! We’re asking for one thousand pounds which seems a lot, I know, but compared to the billions of dollars that people spend on Hollywood films, it’s barely anything. The money is intended to go towards costumes, location hire (we’ve found an indoor victorian street in a museum in York!), caring for actors’ needs and anything else that a film production requires. I’m not going to beg you to pledge, I’m just going to say that I would really, really appreciate anything that you could kindly give; it’s my last ever uni project and I just want it to be the best that it can!

So please, explore the page, visit the website, get involved and enjoy! That’s all I ask, really.

Here’s the kickstarter link: https://www.kickstarter.com/projects/1233333540/a-murder-of-crows-steampunk-crime-drama-web-series and here’s the website link www.pickupfilms.co.uk if you just fancy a browse.

Thank you! Love you!

I know you’re probably a bit fed up of the whole Kickstarter thing by now, but I thought you’d all appreciate the knowledge that we’ve achieved our target within three days! Yay! Ladies and gentlemen, this isn’t to say that you still can’t donate your hard earned dosh, we’d still greatly appreciate more money to play with and it would just mean a better film! It’s not like you’ll get nothing for it, you’ll get at least a copy of the script and or/a dvd of the actual film, which is what it’s all about, am I right?

In other news, I’ve recently become a student ambassador at YSJ which is a pretty big deal for me. It basically means I am a semi-working girl! Huzzah! my first shift is tomorrow for the uni’s open day and if I’m honest, I’m bricking it.

At the moment, I’m just sitting here with my production crew plus Sam (a lame face who doesn’t read this blog and therefore can’t get offended 😉 ) and we’re having very vague discussions about the film. I think I’ll have to go to bed in a few hours to get enough sleep for tomorrow…yeah.

GUYS. THIS IS IT!

This is the link to our kickstarter page for our film project about two sisters battling the odds to survive! No it isn’t The Hunger Games! No it isn’t How I Live Now! YES IT WILL BE ACE!

So please, please, please I am asking you – no – I’m begging you, out of the kindness of your hearts can you spare a few bob for us? Anything that you can afford, we will appreciate it so terribly much. You’re all fantastic WordPress friends and you’re all ace bloggers. It’s not just throwing money at us, you do get something back, it’s all detailed in the campaign.

Just remember, I love you.

I’m in third year now – yes, scary, I know this – and we’re well on our way with the pre-production stage of making our film! It has to be said it’s very ambitious as a student project but I think it will be achieved through lots of hard work. This is where you lovely guys and gals come in. I believe that we are setting up a Kickstarter project, which, if you haven’t heard of it, is a website that supports crowd funding. Essentially you post a project and a target and people can pledge money to you, as little or as much as they like, and in return you give them rewards such as merchandise or even a credit. The page isn’t online yet but I shall be posting the details as soon as. Guys, I’m not asking for much, but I really love this course and I would love to do the best with it that it can achieve. I’d love you forever. Not that I don’t anyway, you sexy beast 😉

And now you’re probably wondering what this film will actually be about. Well, let’s just say for now that it’s set in the not too distant future and it’ll be cool as balls. Details will follow, I promise.

And for your time reading this, here’s a cute little hedgehog.